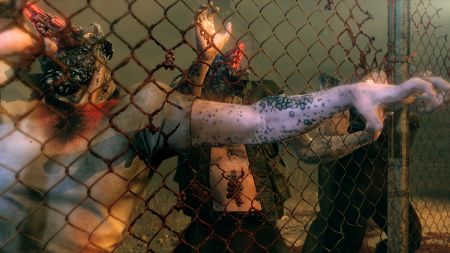 There are a variety of enemies in Metal Gear Survive.

The Wanderers are amongst the most common and weakest enemy type faced. Although slow and predictable in one-on-one combat, they hardly travel alone.

The Bomber is a walking fuse. Get too close or killing it without sneaking up on it will cause it to explode. An optimal strategy is to backstab past their slow movements, or bait an aggressive explosion onto nearby enemies.

The Watchers are an alert enemy. While being weak and easy to eliminate, they mostly serve to alert nearby enemies to your position, while rapidly attacking with ranged shots.

Crawlers are spider like creatures that normally attack in large groups. Commonly waiting to ambush in dark, indoor areas, be sure to check every part of a room before entering; walls and ceiling included.

Detonators are normally seen in Co-op missions. They typically defend bonus Side Objectives and Iris Collection areas. Like the Bomber, getting its attention will cause it to self-destruct, usually taking the objective with it. A stealth backstab will not only secure the objective, but will also open the loot the Detonator itself carries.

Grabbers are insect creatures in the dust that hide underground with grass like tendrils that poke out. If you are noticed, it will sprout out and grab hold of you, forcing you to shake it off. Keep an eye on your threat ring, or bait them out using Kuban Crystals.

Trackers are Super Wanderers. They tote superior mobility and speed, and are reminiscent of the Skulls in MGSV, although being much less durable. They also have the ability to bring back Wanderers that you have killed.

Mortars are heavily armored foes that can fire a variety of weapons out of its left arm. It can lay down artillery fire from a distance, and defend itself from close range attacks by firing in both shotgun and machine-gun like fire. They will also counter backstab attempts if they are currently in combat, causing them to be a large threat as they cannot be easily disposed.

There are also Armored wanderers, which are just regular wanderers wearing body armor. Their combat armor makes them impervious to backstabs as well as negating damage from most sources, although a backstab will force off the helmet, exposing a weak point.

The Lord of Dust is the main boss of the game. Signaling its approach with heavy quakes and crushing any enemies come anywhere close. Nearly impervious to all sources of damage, it would be best to steer clear of its path.

There is also a creature in the Dust called a Big Mouth which is a boss within stong enemy side missions. Extreme caution is advised when stumbling upon him.