Reeve is a character in Metal Gear Survive.

Reeve is the first living person you encounter in Dite. After heading through the abandoned factory, the player stumbles upon Reeve trying to communicate with his XOF comrade. Unfortunately, the XOF soldier recognizes the player's Mother Base fatigues and acts hostile. 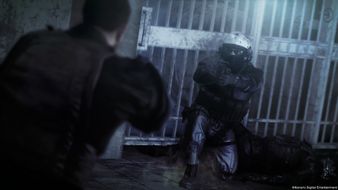 After a tense standoff, the XOF body reanimates as a Wanderer, attacking you both. Reeve eventually saves you when you are cornered by Wanderers in a hallway, and engages in a conversation with Goodluck over comm. Realizing that survival requires cooperation, Reeve drops his hostility toward the player for the time being and heads to Base Camp.

This article is a stub. You can help Metal Gear Survive Wiki by expanding it.